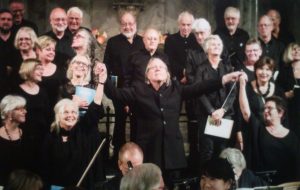 After a 35 year long career as an actor and opera singer Niels Borksand took up the baton in the year 2000 and began studying with the foremost conductors in Denmark, including Frans Rasmussen and Ole Schmidt, and with the Austrian maestro Dietfried Bernet for whom he also worked as an assistant.

Participated in  Masterclasses in Münich in 2003, under the first International Sergiu Celibidache festival, and in Bulgaria.

Establishing his own orchestra The Sinfonietta Arctica   – to day  N.B. Concert Orchestra –  ( N.B. koncertorkester ) – with which he has performed many concerts in Denmark and on tour in  Greenland, where he conducted the first ever performance of Handel’s Messiah in 2004 and Mozart’s Requiem in 2005.

Borksand is leading acclaimed yearly performances of Messiah in Copenhagen.  A work he has conducted more than 40 times and recorded on the label  CDKlassisk as well as the Requiems  of Mozart and Verdi.

In Bulgaria he has conducted Puccini’s La Boheme and Tosca in Stara Zagora and he he also has a close working relationship with the opera of the Danube City of Ruse where Mozart’s  Requiem and Verdi’s Rigoletto and Nabucco as well as Rossini’s The Barber of Sevilla has been on the repertory. Latest Wagner’s The Flying Dutchmann.

In 2012 he opened the season in Ruse with Danish composer Hakon Børresen’s – until then forgotten – opera Kaddara (set in Greenland). This performance is also available on CD.

To celebrate the Wagner Year 2013 Borksand produced and conducted the Dove/Vicks version of Wagner’s Ring in Copenhagen.

Guest conductor with Paul Abrahams on Ball im Savoy at the National Bulgarian Music and Ballet Theatre in Sofia 2012/13.

As well as producing eleven critically acclaimed CD-recordings for the label Classico/Cdklassisk he has written a biography about the Danish composer Hakon Børresen published on Olufsen books -.